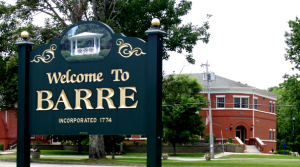 Barre, a part of Worcester County, is home to just over 5,000 residents. The town was originally named the Northwest District of Rutland when first settled in 1720. It was incorporated in 1774 as Hutchinson, after the colonial governor of Massachusetts Thomas Hutchinson; the town was not renamed to Barre until two years later. Barre was chosen for the town to honor Isaac Barré, a Member of Parliament who was an influential voice in fighting for American independence.

Radio Oil services the town of Barre. We provide the area with heating oil, diesel fuels, gasoline, and lubricants and metalworking fluids. As a one-family owned business since 1922, we stand to deliver only quality products to local homes and businesses.

Did you know… Barre is the hometown of Basil Izzi, a World War II seaman who survived 83 days drifting off the coast of Brazil on a raft, after his ship had been torpedoed. Seaman Izzi returned to Barre after his rescue and served as selectman and director of public works in town.