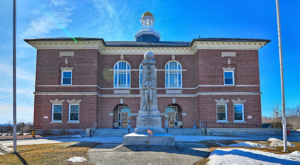 Charlton, named after Sir Francis Charlton, is a part of Worcester County that is home to almost 13,000 residents. Originally designated as a district, law changes eventually made all districts separate towns. The town was incorporated in 1775.

Radio Oil services the town of Charlton and frequents the area several times a week. We provide the area with heating oil, diesel fuels, gasoline, and lubricants and metalworking fluids. As a one-family owned business since 1922, we stand to deliver only quality products to local homes and businesses.

Did you know… Charlton is the final resting place of John “Grizzly” Adams. Adams was a famous California mountain man and bear trainer. He is buried in Bay Path Cemetery.